I love Florentines. I don’t know when discovered them. But I know I loved them shaped like cannolis tubes and filled with whipped chocolate ricotta as opposed to flat discs drizzled with semi sweet chocolate. Florentines are harder to come by as they are more labour intensive as their base is a crushed nut (often almond or pistachio) candied/caramelized with sugar or honey. 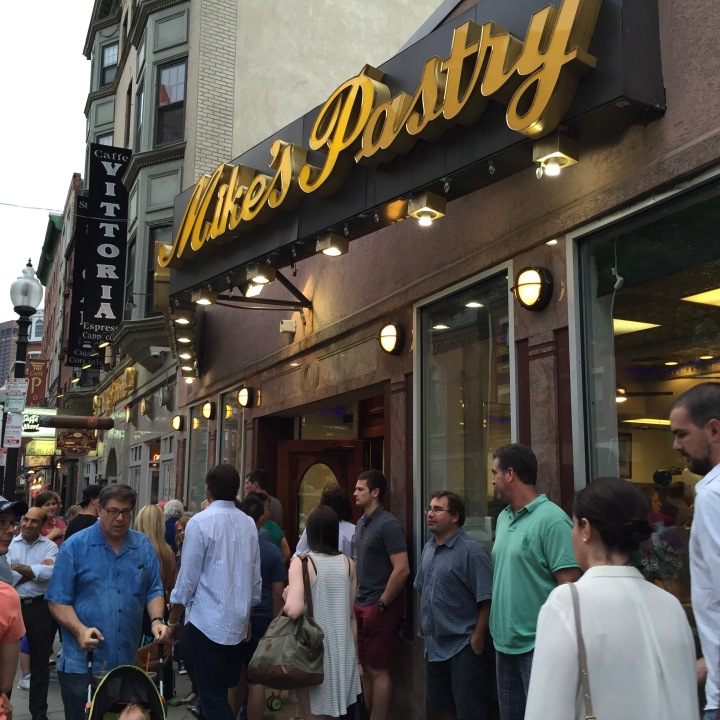 Enter Mike’s Pastry in Boston’s charming North End which is reminiscent of Italy with its cobblestone , narrow streets and architecture with a European feel. It made me feel like I was kind of in Italy again which I miss after living and studying there for a summer once upon a time ago.


Mike’s is busy but lines move fast.  You will see people unintentionally advertising with their iconic White boxes with blue text Pastry boxes filled their take out sweets walking up and down Hanover street after stopping in.

I went to Mike’s excited and anticipating their Florentine. Their wall shows about a dozen different cannolis flavours and their display cases host another two dozens different desserts, cookies and pastries like black and white cookies, Boston cream puffs, tiramisu, carrot cake, lobster tails. There were dozens more but they were blocked by other customers bodies trying to order.

The Florentine was $5 and very large.  It was about 7 inches long and about 3 inches in diameter. It wasn’t the best I had ever had but it was the largest I have ever seen.  The Florentine shell wasn’t crispy as it could have been and the ricotta was on the grittier side and I wish was flavoured with chocolate to bring out the caramel flavours of the Florentine. For 5 bucks though, you are getting you money’s worth and I wasn’t able to eat the whole thing by myself as it is American (super sized).

Though it wasn’t the best I have ever had, it was worth it and hit the spot. It was super sized, American style and extremely large for one person (unless you are The Rock).  I didn’t try anything else because of how large the Florentine was, but it’s worth popping into Mike’s as there is something for everyone.

(If you were wondering the best Florentines I’ve ever had was at King’s Hawaiian Bakery in LA!)

One thought on “Mike’s Pastry”